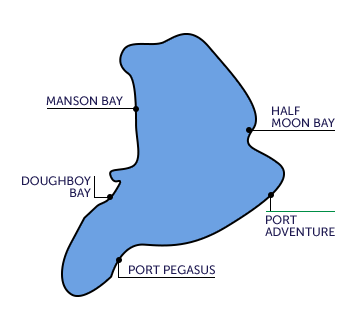 Return to map of New Zealand
Stewart Island lay 30 Km's South of Bluff located at the foot of New Zeasland's South Islands.
The Maori call Stewart Island Te Punga o Te Waka a Maui, which places Stewart Island at the center of Maori History and Mythology and which represents The Anchor Stone of Maui's Canoe, this being what the legend of Maui who caught a great fish from the ocean, this being the North Island of New Zealand.
Translated it means "The Anchor Stone of Maui's Canoe" and refers to the part played by the Island where in the legend of Maui, a great fish was caught, this being our North Island.
A sailing vessel called 'Pegasus left Port Jackson, Australia in 1809 on an expedition of sealing with William Stewart aboard who was the first office and during a visit to the South Eastern Harbour on Stewart Island and which is named Pegasus today, he made charts of the Southern Coastline and even today his work is honoured today,
The majority of Stewart Island is within the Rakiura National Park, here you can enjoy eco tourism, fishing and conservation efforts help sustain the islands inhabitance.

Doughboy Bay is located in a remote part of Stewart Island in the Rakiura National Parkand and where you can truly feel you are away from civilization. A great Tramping Area to explore the area around the Point

Port Pegasus is situated at the Southern end of Stewart Island, with a harbour houses three Islands, Noble Island , Anchorage Island and the largest Pearl Island. Around the three islands are four passages that allow access to the inner parts of the harbour from the sea.

RE DO Long peninsula at the mouth of Paterson Inlet. A low sandy isthmus – the ‘neck’ – nearly cuts off the upper part. Excavation of the middens (ancient refuse heaps) of an early Māori settlement has revealed fish, seal, moa, tītī and other bird bones. A mixed Māori and European population lived on The Neck through the 19th century. Port Adventure Port Adventure is located 10 kilometres south on the coast from The Neck. This is a popular fishing spot as well as diving and local hunting. Previously this was the location of a Maori settlement dating back to 1843.

The main Settlement on Stewart Island is Halfmoon Bay, being the main place that Birdwatchers and Hikers stay. The area is also a Fishing Port with most Island Hikes starting from here. There is a Water Taxi that takes hikers to further afield tracks where they can enjoy the prolific Birdlife.