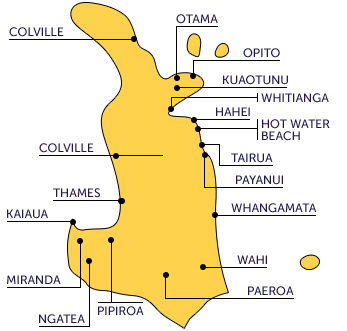 Return to map of New Zealand 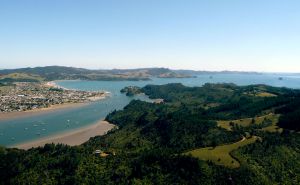 The Coromandel Peninsula is one of New Zealand's best kept secrets, however it is a long-time favourite with New Zealanders who have flocked there for generations during holiday time. The Coromandel offers some of the country's most beautiful beaches, native  forests which include our Giant Kauri Trees, Waterfalls and Lagoons as well as Coastal Walks, Water Activities such as Boating, Surfing and Diving or
In 1769, Captain James Cook arrived and took his first steps on New Zealand soil at Wharekahau Beach or (Simpson Beach as its known locally). on exploring the area he arrived at Shakespeare Reserve as he named this place. It was here where he witnessed in the nights sky the Transit of Mercury. This tremendous occasion where the planets of Mercury and Venus cross the sun's path and how Cooks Astronomer Charles Green was able to create such accurate charts that they are still used today.. In honour of the transit of Mercury Captain James Cook name this bay Mercury Bay and we are all very excited that the 250th Celebration of Cooks Visit will be celebrated in November 2019 with a 12 day celebration and a ceremony on  Shakespeare Reserve attended by the British Royal Family. On 1969 Her Majesty Queen Elizabeth II attended the 200th Celebrations here in Whitianga.
Whitianga is the largest town of the Coromandel Peninsula and  offers shops, restaurants & cafes plus many Water based Activities as well as Great Accommodation. Mercury Bay is a wonderful place to visit and explore the delights of Cathedral Cove and dig to make your own Hot pool at Hot Water Beach, the only place in the World where you can enjoy a thermal waters on the beach.
The Historic Coromandel Town famed for its gold days in the early 1800's, today it has a charm of its own with preserved heritage homes and a fun Narrow Gauge Railway called The Driving Creek Railway which will take you on a journey through native Bush to a scenic look out where you can enjoy wide reaching views of the local peninsula towards Waiheke Island and Auckland City .
We recommend three days as being the perfect time to explore all that The Coromandel Peninsula and Mercury Bay has to offer and is the home of New Zealand Encounters where we get the opportunity to meet our many clients visiting this areas.

New Chum beach is one of the World's top 20 beaches by Lonely Planet as well as a top 3 World Wilderness beach. The delight of a visit to New Chum beach is the journey that takes you there. From the far left side of Whangapoua beach you cross a stream, once on the other side you navigate the shore over boulders to join a path that takes you through a ancient Pohutakawa and Nikau Palm forest, over the saddle bay and down into Wainuiototo Bay, (New Chums Beach). Across the rear of the beach lay Pohutakawa Trees offering a place of shade looking out over the bay,

We ask you arrive enjoy and leave only your footprints behind, this beach is a sacred place to our local Maori and a beach that is the crown in our Peninsula, we hope that you enjoy your visit to this magical place. 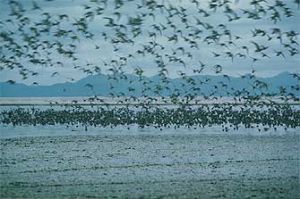 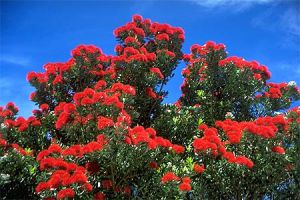 The Town of Thames on the Coromandel Peninsula is an historical town was the main banking town in the Gold Rush Days. Located on the West Side of the Peninsula and a journey North to Coromandel Town is a scene of beauty when you travel under the Pohutukawa Trees that come alive with red flowers in the month of December. 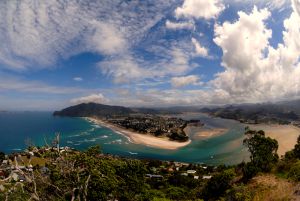 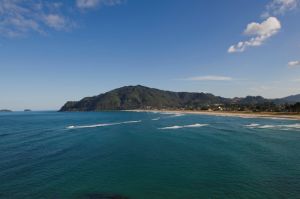 The Town of Paeroa is a lovely town with many Antique Shops and the home of a famed local drink called L&P (Lemon and Paeroa) Located at bottom of the Coromandel and is the start of the drive to experience the beauty of the Karangahake Gorge.

Recently opened is the new Hauraki Rail Trail where you can cycle an old railway line through stunning Waikato Countryside. 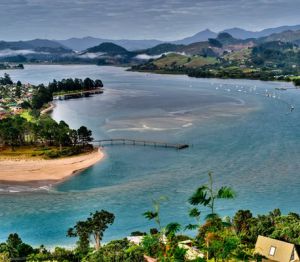 The small town of  Pauanui is in the main a holiday community that lays across from the harbour of Tairua and was the first in New Zealand's to have a canal housing development. You can charter fishing boats from both Tairua and Pauanui

Welcome to the home of New Zealand Encounters and the Historic Town of Whitianga, once called "Te Whitianga a Kupe" named by Kupe  and being the original place name of our town, meaning Kupe's crossing place. It is one of the few places in New Zealand to commemorate Kupe and his Voyage which arrive here in 950AD. Kupe left his people here in the safety of bounty of food and water from the land and went onto explore more of New Zealand.

Following Kupe's visit around 950AD, with his tribe being left with bountiful supplies of food and water from the land, Kupe went onto explore New Zealand, sadly loosing his life in Picton at the top of our South Island. Due to this his tribe and their ancestors today Whitianga can lay claim to over  1,000 years of permanent inhabitants. There was a European settlement located on the other side of the River and known by the name of Ferry Landing in the years between 1836 and 1881.

Captain James Cook  arrived he in November 1769 to observe the transit of Mercury in the Nights Sky and named this place: Mercury Bay. From Cooks journal it said "my reasons for putting in here were the hopes of discerning a good harbour and the desire I had of being in some convenient place to observe the Transit of Mercury, which happens on the 9th instant and will be wholly visible here if the day is clear between 5 and 6 o'clock."  There is a commemorative Cairn of Granite at the far end of  Cooks Beach which tells the story ; "In this bay was anchored 5 Nov 1769, HMS Endeavour, Lieutenant James Cook RN, Commander. He observed the transit of Mercury and named this bay." Captain James Cook.

The Main industries of yesteryear in Whitianga was Kauri Milling, Boat Building, Gium Digging and Gold Mining as well as Flax Milling. Whitanga was a main Port in the export of Timber, especially Kauri that were used for their long and strong wood as main masts for ships of the day. There where regular ships from United Kingdom, France, Italy, Sweden and Norway to name but a few.

Today Whitianga's main income is from Tourism, Farming and Fishing

in the Far North of the Coromandel Peninsula are the small towns of the Coromandel Township, Colville is the last stop for provisions as you continue North to the far and small communities. Colville was a major timber milling town, when in the 1970's the hippies came for the isolation and natural beauty of this region. Today Colville remains one of the quiet er parts of our Peninsula and those who live here are mainly farmers and Artists,

If you are keen on Hiking the Coromandel Walkway 10 Km's and 7 Hour Return is a must. The stunning coastal walk starts from Stony and Fletcher Bays and takes you across farmland, forest and great views of Pinnacles. You will also see out to see and the Great Barrier Island as well as Cuvier Island.

Otama Beach is located North of Whitianga approximately 20 Km's and is located on the Northeast coast of the Coromandel Peninsula, New Zealand, 20 km north of Whitianga. A beautiful White Sanded Beach is in essence the perfect Kiwi Beach, off the beaten track and has a large protected and natural dune system, which separates it from the road. You have to travel off Highway 25 into Kuaotunu then follow Black Jack Road, this is a sealed road up to the start of Otama Beach, then a gravel road onwards to Optio Bay well worth the time to visit.

Opito Bay is a small community of only about 8 houses located on a outer peninsula with another white sandy beach which is perfect for Swimming and Snorkeling,

A visit to Opito bay is in a word simply fantastic.

The small village of Kuaotunu is a lovely coastal village providing am idylic lifestyle as well as a holiday area. With safe swimming beaches north facing onto the Pacific Ocean and the Hauraki Gulf

There are Surfing and Snorkeling areas as well as a great launch area for boats to further explore the many islands for diving and water activities.

In New Zealand we love Kiwiana and there is no finer place than Lukes Kitchen, where the most amazing pizza's are created and local sea food served. Set and enjoy a meal whilst the sun goes down, Wine and Drinks are available to purchase or bring your own for a $5 corkage fee. Each and every chairs and table's are different and creates a real Kiwiana feeling. There are often local performers who entertain you during your meal.

The Village of Hahei  is located near to Cathedral Cove on the east side of the Coromandel Peninsula. The Coastal Walk to Cathedral Cove will take you approximately 40 minutes each way, However of arrival you are greeted with the natural beauty of two beautiful sandy beaches separated by a natural archway and from where the name Cathedral Cove was born,

The rear of the beach is lines with our Christmas flowering Pohutukawa trees, offering a place to sit in the shade looking out into the Hauraki Gulf and Islands,

On the walk down from the Car Park or on the return, take time to walk down to Sting Ray Bay, at the end of the path are large boulders, if you walk onto these and to the edge you may be able to see Large Sting Ray in the waters below. Orca Whales are often seen here as their favourite foods are sting ray. 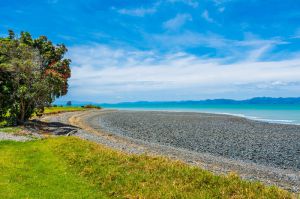 The Road to Miranda and Kaiaua is along the Bird Coast and well worth the scenic route to or from Auckland, adding an additional hour to your journey, but well worth it to enjoy the journey through small villages and settlements. Miranda is famed for their hot thermal pools so a relaxing stop is always an enjoyable one. The Seabird Coast is home to flocks of birds that Migrate heres. At Kaiaua there is a great Fish and Chip shop, said to be one of the best in New Zealand, What's better than fish and chips, a view and friendly seagulls eager to make friends. 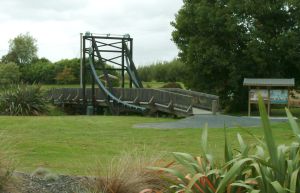 The Town of Ngatea is a small settlement located on the Hauraki Plains and is a service center for Farming Communities of the local area. The Ngatea Water Gardens is well worth a visit and located off State Highway 25. The Gardens have paths that will take you bridges where you wil see below water lilies. There are waterfalls as well as fountains and a waterwheel.

The Village of Pipiroa is not a large the has a funky cafe called Bugger, rather strange one thinks as they drive past seeing a bright red Tractor. But stop and enjoy a friendly welcome and a nice meal or refreshment. Located on State Highway 25.

Cathrdral Cove is one of the top places to visit in New Zealand and one of the Gems of the Coromandel Peninsula. The walk is accessed from the main Car Park where take a scenic coastal walkway along the cliffs and through native bush as you descend to the Cathedral Cove Beach below. With ancient Pohutakawa Trees offering shade along the rear you step onto the Film set of Narnia Prince Caspian. The Natural Arch stands majestically between two beaches that are perfect for Swimming.

Hot Water Beach is the only natural hot thermal beach in the World where you can dig your own Hot Pool on the Beach during low tide.